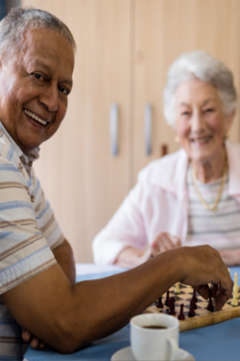 New research examining the link between social contact and dementia has shown that group socializing can prevent the harmful effects of aging on memory. The research was conducted over a 28-year period, led by Andrew Sommerland, Ph.D. from the Division of Psychiatry at University College London (UCL).

Many studies have found an increased risk of dementia and cognitive decline in people with a smaller social network or less frequent social contact. However, most of these studies were limited to a four-year trial and the observational findings could be biased by reverse causation, meaning that social isolation may be an effect, rather than a cause of dementia.

Sommerland and his team decided to investigate the link between dementia and social contact for 7 times longer than these other studies. Full results of the 28-year “Whitehall II” study appear in PLOS Medicine, a peer-reviewed journal.

The study included 10,308 participants between the ages of 35-55 in 1985-1988. The participants were clinically followed until 2017. Individual cognitive status was assessed five times, using standard tests of verbal memory, verbal fluency and reasoning.

The study found that more frequent social contact at age 60 with friends, not relatives, correlated with lower dementia risk. A person who saw friends almost every day at the age of 60 had a 12 percent lower risk of developing dementia later on, compared to someone who only saw a couple friends once every few months.

Senior study author Gill Livingston, a professor at UCL’s Department of Psychiatry, wrote about the findings: “People who are socially engaged are exercising cognitive skills, such as memory and language, which may help them to develop cognitive reserve – while it may not stop their brains from changing, cognitive reserve could help people cope better with the effects of age and delay any symptoms of dementia.”

The concept of cognitive reserve refers to the brain’s flexibility and capacity to use resources in novel ways to solve new problems and challenges. Education and the discovery of new information can help build cognitive reserve.

West Hartford Health & Rehabilitation Center specializes in dementia care. If your loved one needs skilled nursing care, contact us to learn about the admissions process.