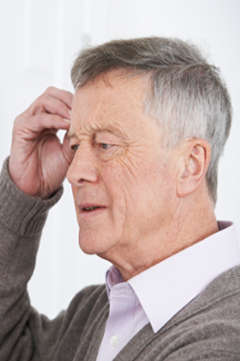 Alzheimer’s impairs intellectual abilities and memory, which often interferes with a person’s daily life. While there is currently no cure, the disease can present early signs and symptoms. An early diagnosis could lead to early treatment, to keep you one step ahead of its development. We review five signs that may indicate someone is suffering from Alzheimer’s.

As we age, our memory can start to fade. However, not every level of forgetfulness is cause for concern. When someone repeatedly asks for the same information, even after they have just been told, this may be an early sign of Alzheimer’s disease. Forgetting important dates, events or people and relying more on others to complete daily tasks are also common symptoms.

Someone with Alzheimer’s may get upset more often and easily than someone without the disease. Alzheimer’s may cause anxiety, confusion and depression, which can lead to uneasiness and irritability – especially when away from home.

Along with memory loss, putting items in unusual places and having difficulty finding them is another early sign of Alzheimer’s disease. In some cases, a person may accuse others of stealing when they are unable to find items they recently put away.

A person with Alzheimer’s disease often has difficulty following conversations and tends to tell the same stories to the same people. They may also continually interrupt the conversation and ask for things to be repeated.

When someone has trouble driving to a place they have been countless times, does not remember the recipe for a simple meal or forgets to keep track of monthly bills, these signs of memory deterioration could also indicate Alzheimer’s disease.

If you notice a loved one showing some of these signs, it may be the onset of Alzheimer’s. Seeking treatment sooner than later can increase a person’s chances of maintaining independence for as long as possible. To learn more about our dementia neighborhood at West Hartford Health & Rehabilitation Center, contact us today.

Please Share This
Read Previous Article:
« How To Be a Good Caregiver
Read Next Article:
Causes and Symptoms of Dementia »